All entries of this blog.

Spoiler advice: This posts (obviously) contains a way how to solve the “Jindosh Riddle” in the video game Dishonored 2. I’m not sure if you consider that a “spoiler”, but if you prefer to solve it completely on your own you should probably stop reading now.

Also, if you’re not into programming / math, this might be a bit boring. I’ll try to keep it understandable! 😊

So I recently started mission #6 of Dishonored 2 and faced the “Jindosh Riddle”. A locked door behind 5 columns, each column providing a choice of 5 family names and 5 heirlooms. On the right was a note explaining the puzzle. My note looked like this, but from what I read online later, this is randomized for every playthrough. 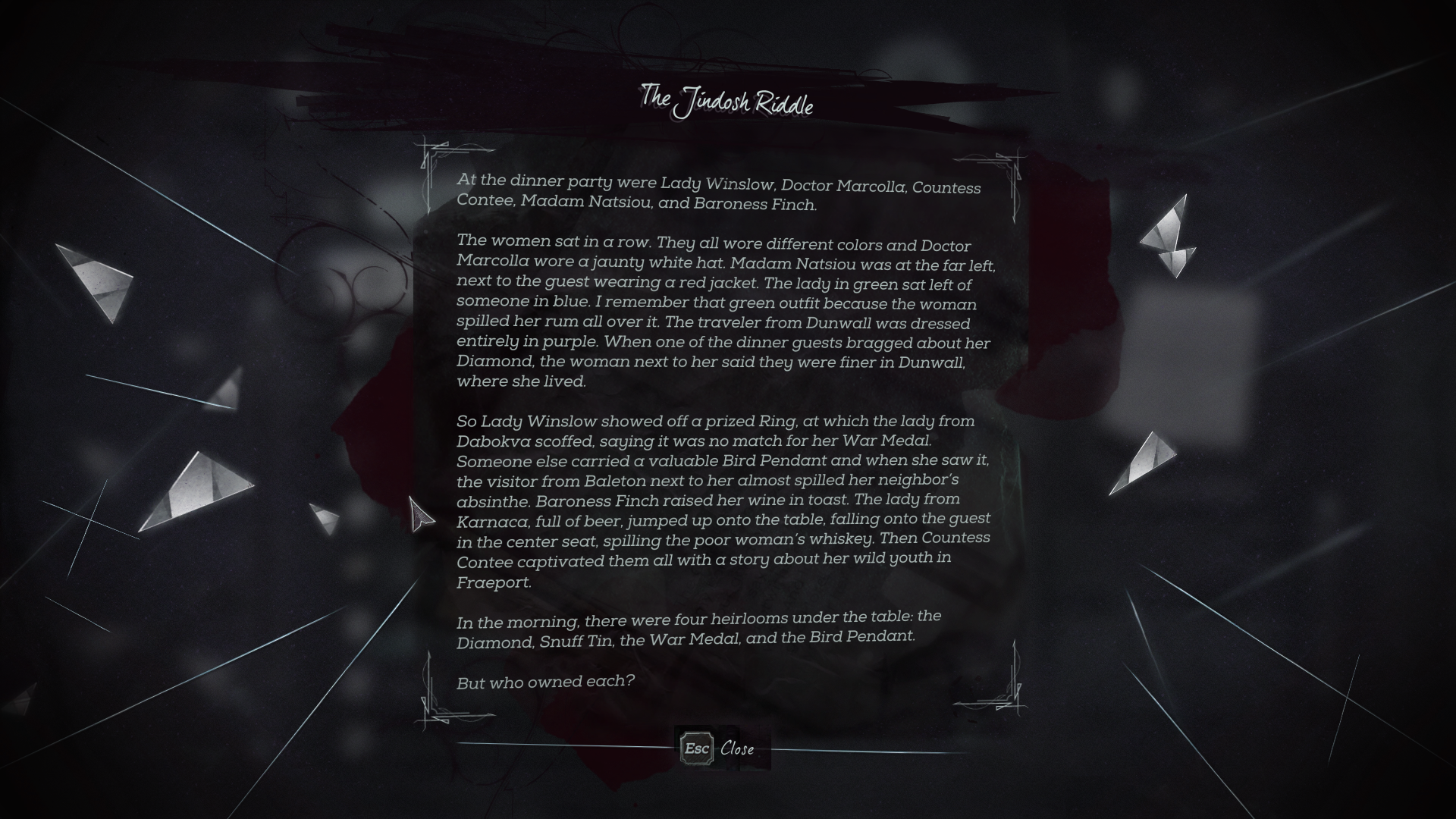 The women sat in a row. They all wore different colors and Doctor Marcolla wore a jaunty white hat. Madam Natsiou was at the far left, next to the guest wearing a red jacket. The lady in green sat left of someone in blue. I remember that green outfit because the woman spilled her rum all over it. The traveler from Dunwall was dressed entirely in purple. When one of the dinner guests bragged about her Diamond, the woman next to her said they were finer in Dunwall, where she lived.

So Lady Winslow showed off a prized Ring, at which the lady from Dabokva scoffed, saying it was no match for her War Medal. Someone else carried a valuable Bird Pendant and when she saw it, the visitor from Baleton next to her almost spilled her neighbor’s absinthe. Baroness Finch raised her wine in toast. The lady from Karnaca, full of beer, jumped up onto the table, falling onto the guest in the center seat, spilling the poor woman’s whiskey. Then Countess Contee captivated them all with a story about her wild youth in Fraeport.

In the morning, there were four heirlooms under the table: the Diamond, Snuff Tin, the War Medal, and the Bird Pendant.

But who owned each?

This sounded like the kind of thing I studied for one semester during my bachelors degrees: Linear programming a method to solve and optimize1 a mathematical model. I never had the chance to actually apply what I learned in that course so my nerd brain fired up!

Using linear programming to solve such a puzzle doesn’t sound so hard, in theory. I, however, haven’t done anything like that in years. So I obviously had some challenges.

The first step involves finding the magical black box (the “solver”) that will transform your problem description to an actual solution. Don’t ask me how it does that - it’s called “simplex algorithm” but I’m way too stupid to understand it. I no longer have access to the tools I had during university, but luckily there are free alternatives online. I’ve chosen this online solver.

Then we need to set up “constraints”, mathematical formulas that constrain the variables we just created. The first few are quite easy: Each position has exactly one instance of an attribute set to true, i.e. the sum of all the variables for one attribute must equal to true. The same thing applies the other way round, each attribute is true on only one position. This prevents the solver from giving the same heirloom to everyone or seating multiple people at the same position:

We now get to the constraints from the riddle’s text itself. Those directly referring a seat position are still somewhat simple. We just set THAT specific variable to true (i.e. “1”):

In combination with the rules from above that means that the solver can now infer a “If Madam Natsiou was sitting leftmost, that place can’t be used by anyone else now. Also, Madam Natsiou can not sit at any other seat.” rule.

Other riddle hints follow a “one attribute causes another attribute” pattern. We can get that to a mathematical constraint by ensuring that either both attributes for a given seat position are true (1), or both are false (0). The math is simply a subtraction: The first attribute minus the second attribute must equal to zero. As both “0 - 0 = 0” and “1 - 1 = 0”. This is repeated for every single position (the curly braces in the constraint name) as each position has their own copy of that attribute:

The next kind of constraint is already quite difficult as it takes into account the position relative to another: “The lady in green sat left of someone in blue.” It took me some research into a very similar problem to figure out, how to write that constraint. By multiplying the position with the attribute value (0/1) and subtracting that with the product of the other attributes value and that position, we get the distance between both seats. Ensure that distance is exactly -1 and the first seat will be directly left of the second one:

And the final kind of constraint is basically the previous one - just taken a step further: We no longer know if it’s the left or the right neighbor. This can only be solved by creating some more variables (pushing the count to 128) which take into account if we use the left or the right side. We can, once again, use the property that any number times zero results in zero, to provide a “but maybe it is the left seat” alternative to the constraints, as 1 - (2 * 1) reduces the right-hand-side to -1 in case for a left-side seat, or keeps it on +1 for a right-side seat:

The solver ran and produced an output. Wohoo - There actually is a solution to the riddle! However, as there are 128 different variables, the output is quite difficult to read. So I added some code to print only the variables I’m actually interested in, those that evaluated to true. MathProg doesn’t have an “if” statement as you’d expect in general programming languages, but we can “cheat” by creating a for-loop (for a set of the single element “0”) with a condition:

We get our output:

It actually worked! On the first try. This is probably something I never managed during my entire programming career. I feel kinda proud.

A huuuuuge thanks to Arkane Studios. I think adding (and testing) this puzzle, which seems to be generated randomly on every new play-through, is a ton of work. I had very much fun solving this monster and applying skills I’d never use elsewhere. This was something really unique for a video game!

This is the full code for the model: